When to See a Sinus Doctor 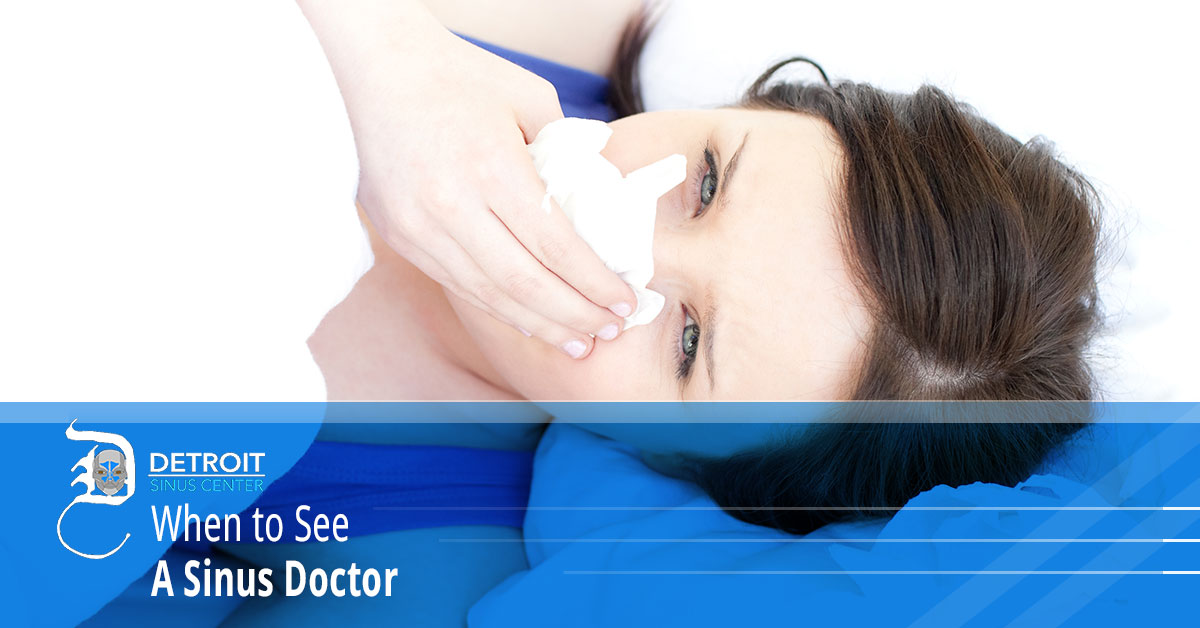 The sinuses are one of the most important parts of the human body, and for some reason, they just don’t get the attention that they deserve. There are all kinds of conditions that constantly get mainstream attention, but sinus problems go under the radar for a lot of people.

In reality, your sinuses have an effect on a lot of the other systems in your body, and they are a very strong factor in how comfortable you may or may not be in day-to-day life.

Whatever the reason is, it’s important to leave it behind and know when it’s time to see a doctor. Minor sinus infections are annoying and irritating at best, and destructive at worst. Here is when you should call a doctor for your sinus problems:

If You’ve Had Symptoms for More Than Ten Days

Sinusitis, the most prominent form of sinus infection, comes in many different varieties but is generally broken down into three categories:

Of these three categories, both recurrent and chronic sinusitis should be treated by a sinus doctor. These are conditions that are symptomatic of bigger problems, and they can cause a fair share of issues themselves. A sinus specialist will help you to understand what’s causing your long-term sinus problems and propose treatments that can get rid of the problem for good. Wouldn’t that be nice?

If Your Symptoms Are Accompanied by Pain

Another red flag with sinus issues is that they’re causing you pain. Typical acute sinusitis can be painful, such as when you get a sore throat, but it’s generally more of an annoyance than an actual physical pain. When your sinus infection is starting to become painful, it might be time to see a sinus specialist, because this is a sign that it’s more severe than normal.

It’s important, however, to understand where to look for the pain. Sinus pain might not manifest itself in the places you expect, and if you’re not being vigilant, you might assume the pain you’re feeling is from other unrelated causes.

It’s easy to have a runny nose and sore throat and assume that the accompanying headache is due to something else, or that the timing of your earache is a tragic coincidence. In reality, these might all be connected to your sinusitis, and if so, it’s definitely time to call a sinus doctor.

If Your Symptoms Are More Severe Than Usual

It’s safe to say that just about everyone has run through the usual gamut of having a cold. You should be very familiar by now with what a typical acute sinus infection feels like, as the symptoms tend to generally be the same even as the common cold mutates from year to year.

And that’s why, if you experience sinus issues that feel more severe than usual, you should go see a sinus doctor. Powerful symptoms are indicative of a more serious problem. Extreme headaches, an exceptionally sore throat, and major congestion are all reasons to see your local sinus specialist, especially if the latter is interfering with your ability to breathe.

At Detroit Sinus Center, we’ve been treating people all over the area for years with their sinus infections, and we’d be happy to serve you too. We offer balloon sinus dilation, endoscopic sinus surgery, and medical therapy to our patients, all of which are effective at treating sinusitis, both in the short and long-term. Whether you’re in Detroit proper, Allen Park, or Southfield, we’d be happy to help you with your sinus infection. Contact us today to request an appointment!